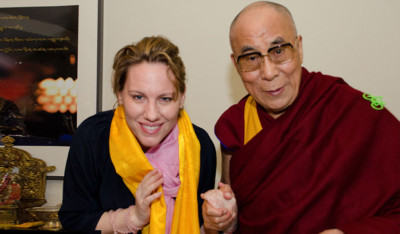 One of my first experiences with lineage was in 1997, in New York City, at the end of a three day teaching on the Perfection of Wisdom Sutras and Buddhist Refuge with His Holiness the Dalai Lama. At the end of the teachings, His Holiness and an entourage of about twelve Tibetan monks were packing up to leave. I remember remaining in the theater, watching them until the last, and walking outside to see them exit the stage doors with their belongings, get into cars, and drive away. One of them saw me watching and stopped, looked deeply and kindly at me, and smiled. Then he continued loading up the cars. As they pulled away from the theater, I was crying.

I remember a distinct, powerful, and quite surprising longing that arose as foremost in my mind and heart at that time: I wanted so much to go with them. Actually, I felt as if I should be with them. This was quite disorienting—like that feeling you get when you make a wrong turn somewhere and suddenly realize that you need to go back and turn left instead of right. The longing was visceral and physical, and completely illogical. I was 24 years old, I had just graduated university and returned to New York from living abroad, and I was working as a bartender in Manhattan trying to figure out my next move.

In retrospect, this was an early experience with a connection to a Buddhist lineage. Formally, a Buddhist lineage is a line of transmission of the Buddhist teaching that is traced back generations to Buddha himself. There is a great deal of conversation, debate, and discussion about lineage in Buddhism, and in Tibetan Buddhism it is particularly important. The Tibetans pride themselves on having maintained unbroken lineage transmissions of many teachings and practices directly from enlightened beings, a reality that, in the minds of the Tibetan scholars and practitioners, ensures the authority and authenticity of the tradition. The particulars of the validity of this position are many and are far beyond the scope of this piece; instead, here I would like to share a little bit of my personal experience with lineage, as a modern student of Tibetan Buddhism in contemporary America. I think it is quite possible to find formal, meaningful, deep historical and philosophical views on the issue from many reliable sources, so I will focus on speaking mostly from my own practical experience.

The first time I went to visit my heart teacher, Yangsi Rinpoche, at Deer Park Monastery (after having met him in Europe the summer before and immediately deciding to move to Madison, Wisconsin, where he was living, to study with him), I remember walking around the stupa with Rinpoche at Deer Park, talking about something or other, and having a strong feeling of being embraced, and cherished. It was almost as if I were being physically held, although no one was touching me at all. “This is what it feels like to really be cared for,” I thought.

Over the years, I have watched this same sense of love and care come alive between Yangsi Rinpoche and his own teachers. These relationships have been among the most extraordinary teachings of my life.

An American scholar, Nel Noddings, writes about ethics and care theory in education and communities of care in schools. Her work focuses on the significance of caring and relationship as both a goal and a foundation of education. She centers caring rooted in awareness of relationship as the foundation of effective pedagogy, and stipulates that it is the caring itself that acts as the primary condition for the development of ethical behavior in the student.

Although I have never heard of a formal philosophy of care from a Tibetan teacher, in my experience, a similar dynamic of caring is central to the concept of lineage in the tradition. Some contemporary Buddhist scholars speak of the way that Tibetan Buddhist depictions of Buddhas and lineage masters embody strikingly loving facial expressions, and I have heard my own teachers speak of the way that a loving mentor can make the difference between success and failure in the learning, and especially in the behavior, of a young Tibetan monk.

According to Noddings and others, the caring that a teacher demonstrates for a student functions as a catalyst for their own sense of moral awareness to arise. In Noddings’ assessment, it is the responsibility of the carer to care for the part of the student that cares for others. On that basis, she asserts, the students learn how to become people who care themselves. When we care for others and are cared for, says Noddings, “perhaps the first thing we discover about ourselves is that we are receptive; we are attentive in a special way.” This is the beginning of becoming a caring individual. From Noddings’ perspective, the caring is the fire of the moral individual, who wishes to engage with others in the world in a way that helps them. From my experience of the Tibetan Buddhist perspective, this is exactly the role that lineage holds in the education of the student.

The lineage of teachers stretching all the way back to Buddha is recited formally by young students in monasteries on a daily basis before they begin their studies. This piece is so significant in these communities that in order to even enter and take one’s place as a student on the debating courtyard in Sera Monastery, the students must memorize the names of the lineage masters and recite them for the Abbot without mistake.

Although the majority religious traditions in the West lack an indigenous invocation of lineage as generational interpersonal transmission, in most Buddhist communities in the western world, there is an attempt to integrate the recitation of lineage, at least in the context of major ceremonies and teachings, into our spiritual practices. The purpose of such recitation in the Buddhist tradition, I have been told, is to connect the student of this moment, of this time, with the unbroken succession of other minds that have also sought to learn, understand, and embody the teachings of Buddha. I have not seen a logical proof of the significance of lineage in learning Buddhism yet (although I have no doubt that one exists somewhere), but, relying on confidence in a way of knowing that is mostly unfamiliar to people from a modern North American background, it is safe to say that the opening of the mind with the intention to connect, offer respect, and appeal for inspiration to those who have come before does result in chinlab, which is usually translated as “blessing.” Interestingly, according to my teachers, the actual meaning of chinlab is “transformation,” which is exactly what occurs.

The lineage prayer, as it exists in the Tibetan tradition, is composed mostly of a series of names, with the words, “I offer homage to…” followed by the teacher’s name. The tunes of the chants are extremely beautiful, sweet, and longing, and upon hearing or singing such melodies, I myself have felt my chest area physically expanding. The feeling evoked is of almost unbearable love.

In my own experience, when I meet the gaze of a finely-crafted image of an enlightened being or lineage master, or when I look into the eyes of one of my own precious teachers, this is the feeling that is most apparent—an overwhelming sense of love, care, and cherishing. In the back of my mind is the awareness that I am connecting to a shared aspiration that has been cultivated with strong determination, with great personal sacrifice, and in spite of many obstacles, over generations and centuries, to seek happiness for every living being, without exception. I know that this intention has been held in the minds of so many, for so long, that it has been protected, nurtured, and cultivated, and that, due to the incredible love of these individuals and their vast sense of care for everyone around them, I have the fortune to receive these instructions and practice myself, and in turn learn to care more completely for others.

Like Nel Noddings asserts, the sense of being cared for inspires me to increase my kindness, my compassion, my sense of help over harm, and my determination to act in the world on that basis. Perhaps this is the essence of chinlab. Perhaps this speaks to the actual meaning of the word, transformation, which leads to action.

In any case, to close, with a mind of loving attention and an open heart, I offer homage to the lineage teachers.