This space will present The Word of the Month for those interested in fun facts about Sanskrit, Tibetan, and English words in Buddhism. As a translator, I deal with these words as commonplace every day, so it is good to step back now and then to reflect on their meaning and usage.

The word we encounter this month is bodhicitta.

Sanskrit is a language that forms compounds easily. Many Sanskrit compounds are made by combining two existing words. Sometimes the new word has a meaning different from either of the original words, and sometimes it is a modification of one of the compound’s original words. Just remove the case ending of the first word and afix the second word to it. Nothing more is needed for a Sanskrit compound word.

In the Sanskrit compound word bodhicitta (बोधिचित्त), our Buddhist word of the month, bodhi means awakening; citta means mind. Between them exists an invisible case ending. The result is: “awakening mind” (often seen as “mind of enlightenment”) with the first element, bodhi (awakening), serving as a modifier of the primary element of the compound, citta (mind). In Sanskrit this is called a tatpurusha compound. Both terms can be used outside the compound to convey the same sense as their compounded form. This in fact happens when we translate the compound into English: “awakening mind” or “mind of enlightenment.”

As for the meaning, bodhicitta in its usual context is the altruistic intention to become a buddha for the sake of others, that they too might attain buddhahood. Bodhicitta itself is not a Buddha’s awakened consciousness, but it is a Buddhist path consciousness. Generating bodhicitta in your continuum marks your entrance into the Great Vehicle Path of Accumulation and the ranks of the Bodhisattva. You are not a Buddha yet — Buddha’s awakened mind is not bodhicitta but sarvajñā, all-knowing – but you are on your way.

Bodhicitta is also spoken of in other Buddhist contexts where it does not imply an altruistic intention but rather is an aspect of the subtle body described in tantric systems. Our concern here is not with its tantric meaning but with the sūtra meaning of bodhicitta, a state of informed altruism, attained by following the seven quintessential instructions of Maitreya: (1) know all sentient beings to be mother; (2) remember their kindness; (3) determine to repay their kindness; (4) generate love for all beings; (5) generate compassion for all beings; (6) develop the exceptional attitude determining to help others; (7) generate the altruistic intention to become a buddha in order to help others to become buddhas themselves.

The Tibetans translated the Sanskrit compound bodhicitta into two words, the first of which is a compound word itself: byang-chub sems , pronounced “chang-choop sem.”

“Sem” means citta. “Chang” and “choop” mean “purity” and “comprehension” respectively. Taken together they represent bodhi. A literal translation might be “mind of perfect comprehension,” although we usually say, “awakening mind” or “mind of enlightenment” if English is required.

Next month we will look at the Sanskrit word dharma. 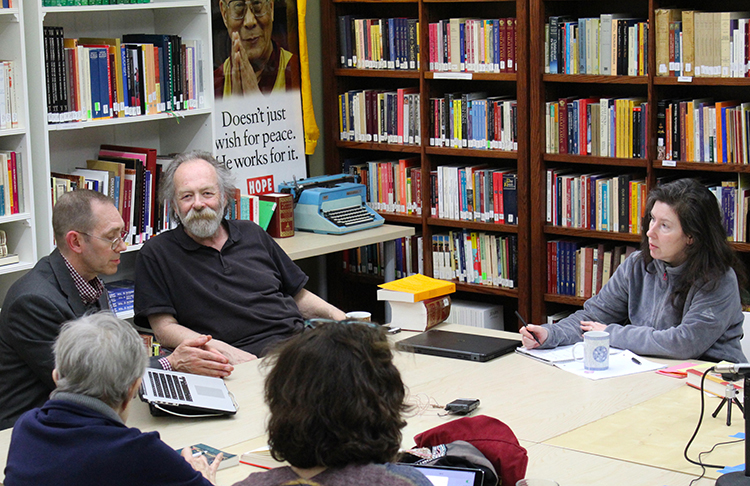 Maitripa College’s Dr. Bill Magee—trained by Jeffrey Hopkins at the renowned University of Virginia program—is one of world’s foremost teachers and translators of classical Tibetan language and Tibetan Buddhist texts.

Buddhist Chaplaincy Training in The Pandemic

What is Lapis?
Begin your learning story here
Join Our E-List To Stay Connected to Lapis and to all Maitripa College News
Page load link
Go to Top