“When I see people with smiles, I feel these are all my brothers, sisters; seven billion human beings, actually, our brothers and sisters.” – His Holiness the Dalai Lama

Environmental Summit with His Holiness the 14th Dalai Lama

In May of 2013, Maitripa College hosted a 3-day Environmental Summit in Portland with His Holiness the Dalai Lama, joined by spiritual, environmental, and political leaders from the Pacific Northwest along with special artists, community activists, and musical guests. The media linked below were created in celebration of the event. Enjoy, Remember, and Rejoice! 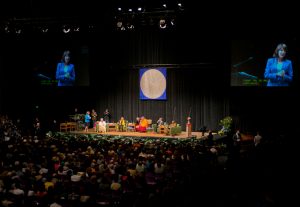 Day 1 am. An Interfaith Event: Spirituality and the Environment

On the first full day of events during the 3-day summit, His Holiness participated in an interfaith panel before an audience of 4,300 at the Chiles Center of the University of Portland. The morning dialogue was moderated by Laural Porter, and included His Holiness the Dalai Lama, Grandmother Agnes Baker Pilgrim, Rev. E. William Beauchamp, Imam Muhammad A. Najieb, and Rabbi Michael Z. Cahana. Opening Ceremonies included the lighting of the candle of peace by interfaith leaders, flower offerings by children from diverse cultures, and an offering song by the Pacific Youth Choir. >MORE 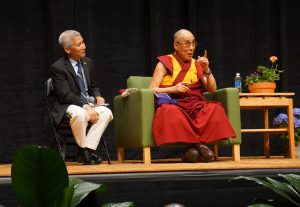 Day 1 pm. Universal Responsibility and the Inner Environment: The Nature of Mind, a Public Talk

Following the morning interfaith panel at the Chiles Center of the University of Portland, the afternoon opened with a Tibetan Cultural Performance by Tsering Lodro and a Native American Cultural Performance by Roy Hayes & the 7-Drum Drummers. A public talk by His Holiness entitled Universal Responsibility and the Inner Environment: The Nature of the Mind was followed by questions and answers. >MORE 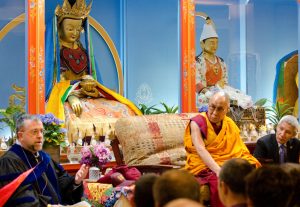 On the second day of the historic visit to Portland, His Holiness the Dalai Lama with translator Thubten Jinpa took part in a “Life after Life” Symposium at Maitripa College. They were joined in the discussion by neuroscientist and author of ‘Proof of Heaven: A Neurosurgeon’s Journey in the Afterlife”, Dr Eben Alexander, and José Ignacio Cabezón, the XIVth Dalai Lama Professor of Tibetan Buddhism and Cultural Studies, and Chair of the Religious Studies Department at the University of California Santa Barbara. The day also included a visit to the international offices of the FPMT and a video welcome by Lama Zopa Rinpoche from Nepal, as well as special meetings with Maitripa staff and alumni and in-person greetings to the joyful crowd that had been watching via a massive video screen set up on the street outside the building. >MORE 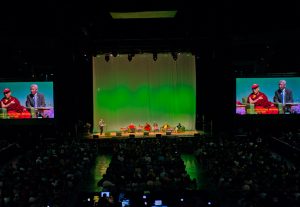 Day 3 am. Universal Responsibility and the Global Environment: A Discussion with Political and Environmental Leaders and Activists

The third and final day of the summit was held in front of a capacity audience of over 10,000 in Portland’s Veterans Memorial Coliseum. His Holiness the Dalai Lama was among a panel of political and environmental leaders, including the renowned Dr. David Suzuki, discussing the roles of science, media, and policy-makers in catalyzing environmental action globally and in the Northwest. This event was moderated by David Miller of “Think Out Loud” on Oregon Public Broadcasting, with welcomes and introductions by U.S. Senator Jeff Merkley, Andrea Durbin, Executive Director of the Oregon Environmental Council, Oregon Governor John Kitzhaber, and award-winning film Director Darren Aronofsky. >MORE 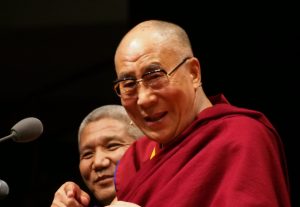 Day 3 pm. Inspiration for the Global Environment: A Public Talk

The summit came to a close on the final afternoon at the Memorial Coliseum with a public talk concluding with the event host Yangsi Rinpoche (President of Maitripa College) offering thanks and leading a moving white scarf (khata) offering from the grateful audience. As His Holiness waved to the joyful crowd, His parting words were: “We are all human beings; the potential I have, you have too.”  >MORE 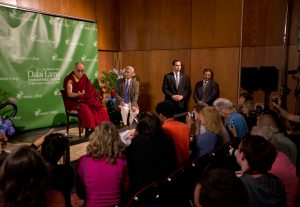 Throughout the 3-day visit, His Holiness generously gave his time to press interviews and special media projects.  >MORE