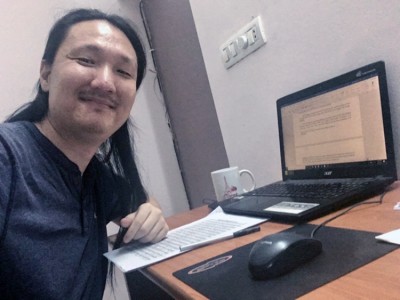 Michael Ium graduated from the MA program at Maitripa College in 2014 and is currently a doctoral candidate in the department of Religious Studies at the University of California, Santa Barbara. His doctoral research is focused on the early history of Ganden Monastery, the home of Tsongkhapa’s nascent Geluk tradition and the mother of all Geluk religious centers who would come afterwards (including Maitripa College!). His research will bring him to South Asia for the better part of two years, and he is pictured here happily self-isolated in an apartment in Bangalore, working on translating portions from a history of Ganden Shartsé college entitled The Mind-Ornament of Jampel Nyingpo, composed by the 18th century Geluk scholar Drakpa Khedrub.

Translation is a funny business. Take the ballyhooed precious stone lapis lazuli that lends its name to this blog and is described in this manner on its homepage:

In Tibetan culture, and many others, lapis lazuli is considered a most precious stone, often even treasured as more valuable than diamonds. Traditionally, lapis has always been associated with spiritual attainment, honor, vision, the sea, the sky, wisdom, and truth. Among Tibetans and many others, its deep blue color has long been associated with healing. Aligning the mission of Maitripa College with these qualities, we chose the name Lapis for this space in the Maitripa mandala.

That is all well and good. But what is really at the core of this mysterious term lapis lazuli, that tantalizes us with its rich associations and exotic quality? The term lapis is the Latin word for “stone,” and the term lazuli is simply a loanword from the Persian lājevard, which Wikipedia informs us is both the name of the stone in Persian and the name of the place where this particular stone was mined. At its root, the term lapis lazuli or ‘Lājevard stone’—for all its rich imagery—is a descriptive term in the vein of French toast and California redwoods.

Still, there is more magic to be unearthed in this humble stone. One of many Sanskrit terms for this stone is vaiḍūrya, and the Wiktionary etymology for this term is worth quoting in detail (and I make no apologies for relying on such sources in these challenging times):

Traditionally explained [by the influential Sanskrit grammarian Pāṇini] as a mineral named after the city of Vidūra. The Sanskrit word is a derivation of the Pali veḷuriya (beryl), itself borrowed from Dravidian, an adjectival form of veḷur (white town) – compare Telugu veli, white) and ūru, town). Vēḷur (modern-day Bēlūr) was the beryl mining capital city known as Vidūra to Pāṇini. The original meaning of the South Indian word was “white crystals of quartz and beryl” (preserved in Arabic and Persian borrowing), and later “colored (blue and green) beryl”, as retained in Pali and Sanskrit.

So, where does the Sanskrit term vaiḍūrya come from, a term that was also transmitted to Tibet as the Sanskrit loanword baiḍūrya? It again arose from the name of a place, in Pāṇini’s time the city of Vidūra that was a center for mining activity of nice shiny stones. With apologies to the vegetarians in the crowd, at its root the term vaiḍūrya has more in common with the eponymous Buffalo wings than Buffalo-headed Buddhas.

Becoming a translator is a bit like this. At first, everything is opaque and obtuse as a stone. In the middle, translations start to become possible and a dazzling array of possible meanings open to you. In the end, you are left with a stone again, but one which you have gained a far greater appreciation for, if only because you had to carry it a long way. And if you’re lucky, other people will consider it a precious gem.

So, if you are willing, I would like to invite you to begin learning to translate Classical Tibetan. It is hard, painstaking, thankless work. You will stub your toes many times. But there is a vast ocean out there waiting to be discovered, with over 15 million scanned pages available on the Buddhist Digital Resource Center website. Along with the notable works that have become foundation stones of Tibetan Buddhism, there are thousands of lesser known works, many of them short enough to be approached by even the novice translator and subsuming a wide variety of genres and literary styles.

Interested in devotional works? You yourself could be the one to translate a work of praise for a lama that has not been seen for hundreds of years. Have a fondness for a specific deity? There are histories of lineages, such as the Vajrabhairava lineage in Tibet, along with countless works of praise, meditational guides, and even biographies of protectors. Confused by a particular practice? You are certainly in good company, as Tibetans themselves composed numerous texts related to rituals of all kinds, dealing with matters both arcane and mundane. Interested in dreams and prophecies? There are collections of such things too, such as collections of prophesies related to Ganden Monastery. Want to know what lama pen-pals used to talk about? There are more epistles out there than Nāgārjuna’s Letter to a Friend.

You get the idea. There is a vast ocean of Tibetan literature out there, with many precious gems waiting to be discovered by those with the ability and inclination to plumb its depths.