Recorded during his visit to Maitripa College in March of 2019, Geshe Kalsang Damdul shares personal stories and experiences from his own life, and relates them to lojong, or the Tibetan Buddhist psychological practice of mind training or thought transformation. With warmth and humor, Geshe-la recalls anecdotes about growing up in Tibet and in exile in India; his mischievous activities as a very “naughty boy” at the Tibetan Children’s Refugee School in Mussoorie; his later ordination and studies with some of the greatest Tibetan Buddhist masters of our time, including His Holiness the Dalai Lama; his life’s work at the Institute of Buddhist Dialectics in Dharamsala, and so on. Geshe-la recalls a life in exile with optimism and joy, showing us by example that even the greatest of adversities can be transformed into the path of Dharma. 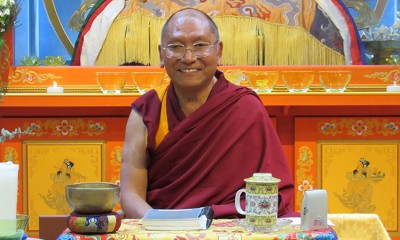 Geshe Kalsang Damdul was born in 1953 in a remote village in central Tibet. In 1959, at age six, he was part of the great wave of Tibetans who fled the Communist Chinese occupation and made the arduous journey across the Himalayas, seeking asylum in India. He began his education with other refugee children in the newly formed Central School for Tibetans in Mussoorie, India.

At age 16, Geshe-la asked to take novice ordination, and subsequently received his gelong ordination from His Holiness the Dalai Lama. He joined the Institute of Buddhist Dialectics (IBD) in Dharamsala to pursue graduate level studies in Tibetan Buddhism, rituals, and meditation practices. Geshe-la received his master’s degree in Prajnaparamita Buddhist philosophy in 1980, and a second master’s degree in Madhyamika Buddhist philosophy in 1983. He received his geshe degree (equivalent to a PhD) in 1995 from Drepung Loseling Monastery in South India. In 1983 Geshe-la was appointed as the assistant director of IBD and remained in their service until his retirement as director in 2018.

Geshe-la has received many empowerments, lineage transmissions, and teachings from His Holiness, and the most eminent teachers of the Geluk school. His root teacher was the late, Venerable Lobsang Gyatso, director of IBD, and one of the most respected logicians, teachers, and meditation masters of the twentieth century.

Geshe Kalsang Damdul has been a devoted public servant to Tibetans in India: he served as a member of the Advisory Council for Tibetan Education; Vice-Chair for the Tibetan Human Rights & Democracy Group; taught meditation in Tibetan communities and schools throughout India; and represented IBD at international conferences. He was elected a member of the Tibetan Parliament in Exile (2011-2016).

Geshe Damdul has worked tirelessly and jovially to share his knowledge of Buddhism in America: through visiting faculty appointments at multiple universities, teaching Tibetan Buddhism and meditation, developing a study demonstrating the positive effects of meditation on PTSD, and teaching meditation at a women’s shelter. He served as spiritual director of the Northwest Tibetan Cultural Association from 2001-2003, and has been the spiritual director and teacher of Shakyamuni Tibetan Buddhist Center in Portland since its founding in 2003 to the present.    >more

Yangsi Rinpoche: The Bodhisattva vow ~ What it means to wish for and engage in actions leading to enlightenment for the sake of all sentient beings

“The Buddha’s Wisdom: The Importance of Dependent Origination” with Jan Willis, PhD