A Message on Behalf of a Great Friend
to Yangsi Rinpoche, Frank Barone 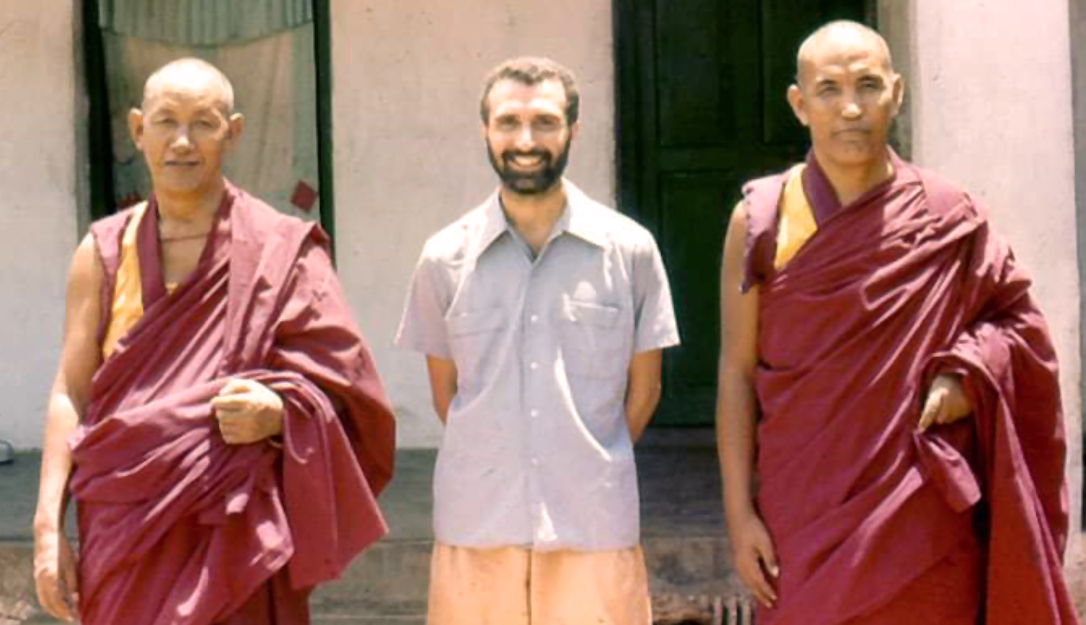 Frank Barone was a Dharma practitioner and my friend since I was young in Sera. We studied philosophy together. In this picture, Frank is held by two great masters—one is the current Ganden throne holder, my personal teacher, and the other is the former abbot of Sera Je, one of the main teachers in Sera, also my teacher and Frank’s teacher.

Last Friday Frank passed away; today is the first “seventh” day in the cycle after passing.  I would like to request all of you to do Chenrezig and Vajrasattva mantra for Frank, and pray for the blessings of the lineage for Frank’s safe journey.

Frank was born in Brooklyn, New York. He was the first child of Antoinette and Vincent Barone. Two dear sisters, Janet and Bernadette were born in the following years. Early in Frank’s life the family moved to East Meadow, Long Island. Frank started college at the Naval Academy and completed his degree in Aerospace Engineering at Brooklyn Polytechnic School. Having an adventurous spirit, rather than following a career in engineering, Frank began to travel, first throughout the country and then up into Alaska and overseas.

On one of his journeys, he travelled to Europe and then went overland through Israel, Afghanistan and eventually into India. There he began a spiritual journey and sought out teachers to learn the path of inner contemplation. His altruistic tendencies eventually led him to Calcutta, where he met Mother Teresa and volunteered his services to help the sick and dying. Shortly after his arrival, Mother Teresa asked him if he would be willing to help the Brothers with their relief efforts in Cambodia, which was then a war zone. He said yes. His time in Cambodia with the Brothers was a memorable one, but the fighting grew closer to their relief camp and soon the danger grew to the point that they were told to evacuate. Frank left for Australia to search out a friend. He eventually ended up in northern Australia to help with the construction of a spiritual center. There he met Anne McNeil, a western Buddhist nun. She inspired another facet of his spiritual search and he then became a lifelong student of Buddhism.

Throughout his life, Frank always maintained close contact with his family and returned home often between journeys. He is survived by his dear mother Antoinette and his sister Janet’s two children, Teresa Orrino (Matthew) and their three children, and Edward Radwinsky (Rachel) and their two children.

Frank was a longtime member of the Deer Park Buddhist Center founded by Geshe Lhundub Sopa Rinpoche and tirelessly offered his volunteer services. Frank always had deep loyalty and gratitude to all the people in his life who benefitted and supported him. Frank was a most fortunate student of Tibetan language and Buddhist logic and philosophy. He was very thankful to his many brilliant teachers for their unending patience and loving kindness.

He also was very grateful to the Benedictine sisters and Father Kohli of St. Joseph’s Home on Long Island, NY for their loving care and support of his mother, Antoinette. Frank called St. Joseph’s, “the best place in the world for his mother to live”.

Frank treasured Catherine Kennedy, his wife, travel partner and spiritual companion of 34 years. She was the fun in his life and could easily make him laugh.

Frank was known for valuing a highly ethical and humble lifestyle and for his concern of the natural world that included great care for the environment.

Finally, Frank felt deep gratitude to his family and many friends for their loving care and support after his cancer diagnosis. This was the last journey for Frank in this life and he travelled it with grace and dignity. He could not have done it without the support of many, in particular the doctors and nurses of UW Hospital and Clinics and Agrace Hospice care during his final days.

Online condolences may be made to www.gundersonfh.com